Most Surprising Closings in Rochester, NY of 2018 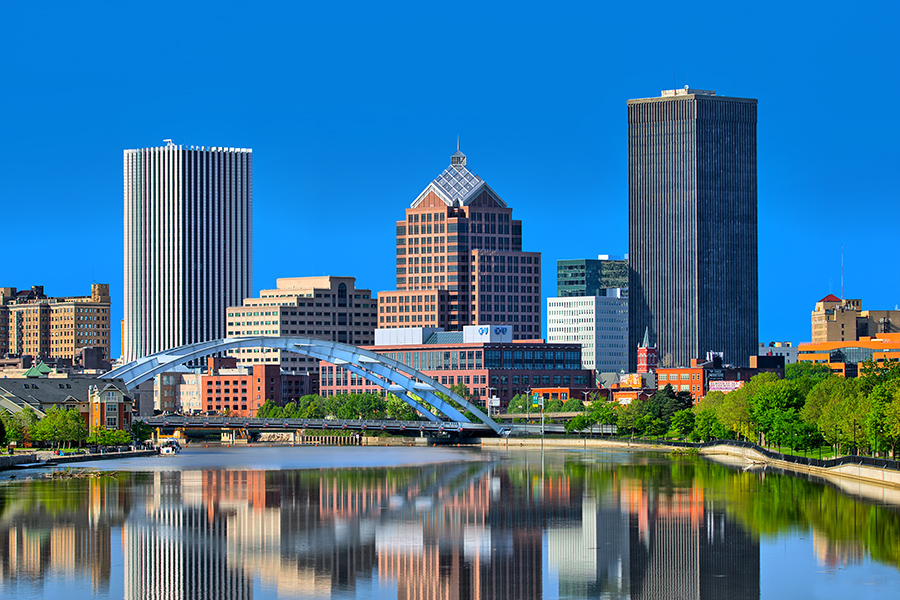 While 2018 gave us a slew of promising new restaurants, it also was a brutal year when it came to restaurant closings.

There were sentimental favorites that maybe we hadn’t visited in a while, but they represented fond memories — places like the Back Nine Grill, the original Sticky Lips, and Nathan’s on Park Avenue.

There were the shockers that seemed to be at the height of their game: 2Vine, Orbs and Joe Bean.

And then there were the ones we hardly knew.

Gerry Vorrasi and Jerry Serafine, owners of 2Vine, were ahead of their time. Instead of a formal space, they chose a rustic brick building, once home to a horse-drawn ambulance company, as the setting for their casual but upscale restaurant. After it opened at 24 Winthrop St. in March 1999, it was the place to be seen.

Four years later, Vorrasi, the chef, sold his share to Serafine, who retooled its formula a few times over the years. Even a major remodeling didn’t recapture the original magic. 2Vine closed its doors in February after 19 years in business.

But good news for fans of the charming brick building: prominent Napa Valley chef Richard Reddington, along with business partner Dennis Wilmot, will be opening a restaurant called REDD in that spot in the spring.

“I just spent my life savings, please eat my food.”

The sign on the marquee caught Rochester’s attention when the 1940s-themed Sticky Lips Pit BBQ opened on Culver Road in 2004. It was among a wave of barbecue joints that opened in a short period of time, taking on established stalwart Dinosaur Bar-B-Que. Few of those eateries remain; Sticky Lips is the one that stuck around.

While the original Sticky Lips Pit BBQ closed in October, the Henrietta location remains open. Howard Nielsen, who owns the restaurant and the Culver Road property, said the decision was the hardest business decision he has had to make.

“I was heartbroken about it,” he said.

Zebb’s Deluxe Grill & Bar closed its location at Tops Brighton Plaza, its only remaining restaurant in the Rochester area, in February. The regional chain subsequently closed its two Buffalo locations; it now has a location near Syracuse and another near Utica.

The restaurant, which opened in 1990, had a retro vibe with eye-catching checkered floors, neon lights and posters of Marilyn Monroe and James Dean. It drew a good crowd, at least in its early days, for its burgers, toppings bar, large beer selection, oversized portions, homemade milkshakes and in-house bakery. There were even Trivial Pursuit cards on the tables to keep customers occupied while their food was being prepared (they came in handy before smartphones.)

A MacGregor’s Grill & Tap Room has taken its place at 1890 S. Clinton Ave. in Brighton.

The gathering place for Abby Wambach fans at the height of her soccer career quietly closed in early January 2018.

The Back Nine Grill opened in 2011 in the site of the former Hawthorne’s and, before that, the Maplewood Inn. The partners at its inception were Andrew Kuhls, Mike Wood and Matt Wambach, brother of Abby (she had no official connection with the business).

It was the epicenter for fans to watch the hometown athlete’s exploits in the 2011 World Cup. One event at the restaurant included a group of 29 members of the Wambach family gathered to cheer her on. ESPN even had a camera on hand to provide live shots during the World Cup final that year.

Adam Gold fell in love with the Water Street Music Hall at 204 N. Water St. while still a student at Syracuse University. Ultimately the aging, cavernous building provided to be the wrong fit for his business, Funk N Waffles.

Business was good for the combination waffle restaurant and performance venue, he said, but not good enough to sustain the operating costs of the building. It has closed, but Gold said he was hunting for a Rochester location that is smaller and has more foot traffic.

“We love Rochester,” he said. “We did well. It just wasn’t enough for that space.”

When I wrote a brunch article in 2015 that did not include Gigi’s Italian Kitchen in Irondequoit, the owners took to email to alert its customers to the perceived slight. My inbox was subsequently blasted with a torrent of emails, some of them consisting of just one word, “Gigi’s.” The episode demonstrated not only the magnitude of its email list, but also the fierce loyalty of many of its customers.

In April, those customers received an email, this time with unwelcome news that Gigi’s was closing its doors. The reason cited was the health of Nick Ryck, who owned the restaurant with his wife, Patty.

Both Rochester locations of the Great Harvest Bread Co. — one at the corner of Park and Goodman, and the other in Brighton’s Twelve Corners Plaza — closed abruptly in August. They both had their origins in Montana Mills Bread Co., which opened in the Four Corners of Pittsford in 1996.

Instead of the more trendy European-style breads with harder crusts, they focused on large, round, soft-crusted loaves such as honey whole wheat, Bavarian rye and the best-selling cinnamon swirl.

Orbs, at 758 South Ave. in the South Wedge, opened in 2014 with a gimmicky concept of meatballs and other spherical foods. Some of its approach was sophomoric — its takeout bags were labeled “ball sack” — but it grew a reputation for seriously good food made from locally sourced ingredients. It closed in May.

The space has since been remodeled and is now home to the Old Stone Tavern, a casual neighborhood bar.

Downtown workers mourned the closing of Hot Rosita’s, which opened on East Main Street in 2010 and drew lines for its quick service setup, giant burritos and tasty tacos.

In 2013, customers watched the action as The Amazing Spider-Man 2 was filmed outside its front door. It has been shuttered since owner Arnie Casselbury announced that it was for sale in February.

Inn on the Lake

The Inn on the Lake Waterfront Resort and Conference Center in Canandaigua closed in October, taking with it The Shore restaurant as well as The Sand Bar. The latter was a popular gathering spot on the water in the summer.

Joe Bean Coffee Roasters has closed at 1344 University Ave., but it is not gone for good.

The owners cited an increase in its roastery business, its lease ending and the departure of some key employees at the coffee bar as among the reasons to move its operation. The new location has yet to be announced.

“We loved the day-to-day world, but it’s a commitment,” said Kathy Turiano, co-owner. “We know change is hard. We’ll still be in people’s day-to-day lives.”

Nathan’s Soup and Salads closed its original Park Avenue storefront in January. While its Eastview Mall, Henrietta and Rochester Institute of Technology locations remained open, the closing on Park Avenue marked the end of an era for many.

Walter Nathan Harby opened Nathan’s in 1980, serving reasonably priced homemade soups, individual loaves of cheesy bread and more. The tiny storefront at 691 Park Ave., set up only for takeout, became known for lines out the door at lunchtime. After Harby’s death in 1996, his sons, Dave and Christopher, continued to run Nathan’s.

Rick Torcello bought the business in 2007. In 2011, its soup production moved to a spacious 3,300-square-foot production facility in Henrietta’s Genesee Regional Market.

In October, Buffalo-based chain Mighty Taco closed its location at 410 Jefferson Road, across from Southtown Plaza.

The Henrietta restaurant opened with a bang on April 19, 2012, with hundreds of people waiting in long lines to get their fix. The demand for the Americanized Mexican fare, which has legendary status in Buffalo, overwhelmed the restaurant’s employees in its early days.

It subsequently opened a second Rochester area location at 2570 Ridgeway Ave. in Greece. That closed as well; Sisu Eats, a quick service food establishment that focuses on healthy fare, opened in that spot.

Known for its offbeat advertisements, Mighty Taco started in Buffalo in 1973.

“Hicks and McCarthy is closed until further notice. Our apologies for any inconvenience,” the Pittsford restaurant posted on its Facebook page in March. There has been radio silence since then.

A mainstay at 23 S. Main St. in the historic village of Pittsford, the restaurant had been serving breakfasts, lunches and dinners for generations, since 1920. The interior had been transformed in various ways, but its homey diner-style approach remained fairly consistent as it changed hands over the years.

The Soup Spoon, a Cambodian restaurant across the street from the College Town development, announced its closing in January via Facebook.

Husband and wife Brianne and Chhaya En opened The Soup Spoon in Victor, Ontario County, in 2012. Its location at 1378 Mt. Hope Ave. opened in 2014.

“We would like to thank each and every one of you for your continued support over the years since our inception in 2012 in our Victor location,” it said on Facebook. “It has brought us great joy to share the cuisine and culture of Cambodia with you, and we wish you all the best in the new year.

A handful of establishments opened and closed within the year:

• Bliss Dessert and Wine Bar, 320 East Ave., appears to be have gone dark. The wine bar was going for more of an upscale approach than its neighbors in the East End.

• Whole-E Roasters has closed its brick-and-mortar location at 3208 Latta Road in Greece. Furthermore, its food truck has headed for Charlotte, North Carolina. Here’s hoping the truck, inspired by carving stations at weddings and brunch buffets, returns in warmer weather.

• Steadfast was slated to be an establishment offering craft beverages, high-quality sandwiches, a general store, cotton candy and a community gathering place. It never fully achieved that vision.