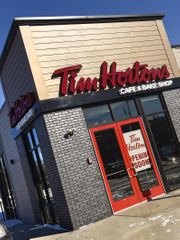 Tim Hortons, the Canadian coffee and doughnut shop that invaded the Twin Cities the past few years, appears to be pulling out of the area — but not St. Cloud.

An employee at the Eagan location confirmed the restaurant had closed as of Thursday and said others in the same franchise group, owned by Tim-Minn Inc., could be closing, too.

On Friday morning, the St. Cloud Tim Hortons at 612 Roosevelt Road was open for business. The restaurant opened in February 2018.

It is not known if the Twin Cities closures will affect the St. Cloud location. A request for comment from the company was not immediately returned Friday morning.

A sign on the Wabasha Street location in downtown St. Paul said, “This Tim Hortons location has closed for business effective today. We thank our guests for all their support. Management.”

The employee in Eagan, who was finishing cleanup for the last time, preferred that we not use their name. But it seems like the news came without warning, leaving employees without a job. None of the Twin Cities locations we called picked up the phone.

Other rumored closures include Dinkytown, Brooklyn Center and the Mall of America, the phone number for which had already been disconnected.

The closures are likely linked to a lawsuit filed by Tim-Minn that alleged price-gouging on the part of the company, according to an article in the Canadian newspaper Times Colonist.

The lawsuit claims that Tim Hortons overcharges for certain items that franchisees are required to carry. Tim-Minn had an agreement to open more than 280 of the shops in Minnesota, and by the time the lawsuit was filed it had opened 14, according to the newspaper.

A 2017 lawsuit filed by Tim Hortons had accused Tim-Minn of not paying required franchise payments.

A company representative emailed the St. Paul Pioneer Press the following: “We are disappointed the franchisee made the decision to close these restaurants without our approval. Since we have a pending dispute with this particular franchisee, we decline to comment further at this time.”