The Impact of Minimum Wage Increases on Restaurants and Tipping 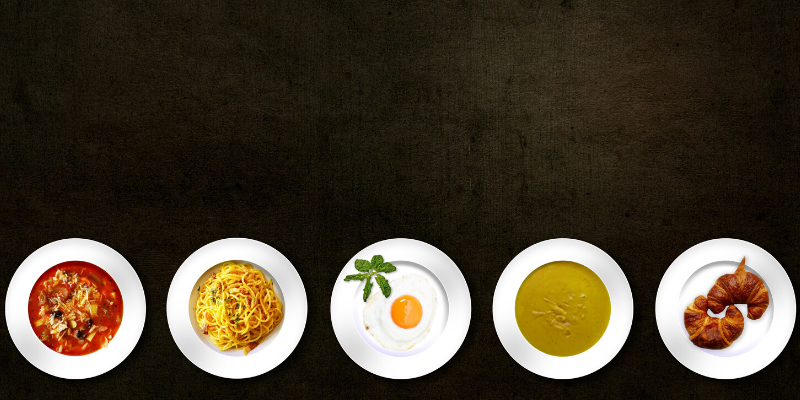 If you’re a restaurateur, chances are you’ve suffered from what we call wage woes—distinct feelings of hopelessness that creep in when questions about minimum wage, labor requirements, and employee engagement start piling up.

When is it appropriate to pay restaurant workers minimum wage? When should you pay more? Do tips impact restaurant wage and, if so, how? What about labor requirements: why does it feel like they’re changing all the time?

We get it: finances are finicky, not to mention frustrating. Add to this the long list of other cash considerations that impact your bottom line—operations, inventory, and marketing, to name a few—and it’s no wonder the Princeton Review named poor cash flow management the culprit behind the majority of new restaurant closures.

The waters of restaurant minimum wage can be murky, but this guide is designed to tackle some of the most frequently asked money questions and hopefully make the journey a little more manageable.

In 2018, 18 states committed to putting minimum wage increases into effect. Minimum wage is increasing across the country, but some front of house restaurant staff are concerned that misinformation, or a lack of understanding of how these increases work, has resulted in negative impact on the tips they depend on, according to a survey we conducted. 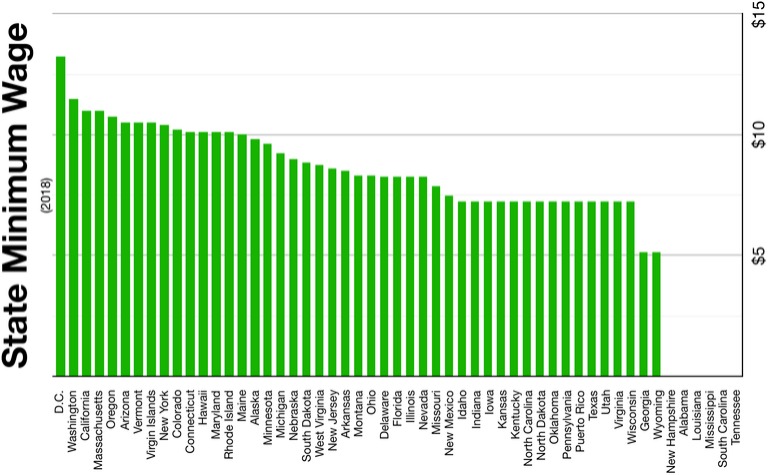 Minimum wage for restaurant workers: Too much, too little, or just right?

Navigating restaurant employee wages can be difficult. What’s the minimum? How do server tips come into play? How should you handle raises? The questions can seem endless, and the answers scarce.

First things first: we know that compensation affects employee recruitment and retention. A 2014 Business Insider survey of millennials revealed that 69% identified pay as their most important job consideration. Through our own research at 7shifts, we found that 42% of restaurant workers cited low pay at the number one thing they disliked most about their job. This leaves restaurateurs with the task of balancing these hard realities against labor costs and, ultimately, profitability.

Add to this the impact of minimum wage increases: according to Bloomberg Intelligence, minimum wage is set to increase in 19 states this year, precipitating labor cost increases of up to 12%. Many restaurateurs are responding to the Fight for $15 and strivin to keep their operations afloat by increasing menu prices, a tactic not always understood or appreciated by patrons.

So what does this mean for employees?

Our friends at Upserve reached out to restaurant workers and gathered some important insights around restaurant wage changes. For example, tipped workers said they wouldn’t accept a substantial increase in hourly pay if it meant eliminating tips. If patrons who refuse to accept menu price hikes choose to withhold tips, this can negatively impact workers’ livelihoods by garnishing take-home pay.

Barring mandatory requirements, however, there are cases when minimum wage remains an appropriate (or even preferred) pay strategy. Experience is a big factor to consider, as is investment: someone in high school who is just entering the labor market and only intends to work one or two shifts per week to save for college might be a better candidate for minimum wage than a devoted full-timer who has expressed an interest in moving up into restaurant management one day.

The bottom line is there’s no magic formula to determine how much to pay your workers, and when (or whether) to increase it. There is, however, a guiding light: federal and state labor requirements.

Survey says: The minimum wage is going up…

…But take home pay is not.

Of respondents who reported a minimum wage increase, however, 73% said that their take home pay—restaurant wages and tips—has not increased.

While salary for a waiter or waitress might be up, tipping is down, with 24% saying their tips have decreased as a result of an increase in minimum wage.

It appears, according to our survey, that restaurant staff believes guests’ perceptions of what an increase in minimum wage means is affecting how much tip they leave.

The thinking goes like this: 45% believe that guests assume the server’s salary has gone up, and staff makes more money as a result of the minimum wage increases, so they tip less.

The reality is that in most cases, tipped workers are not impacted by a blanket minimum wage increase.

The change in laws puts restaurant owners in a tough spot, however. Many restaurants might look at surcharges, or raising the hourly wage while dropping tips. But in our survey, tipped workers said they wouldn’t accept a substantial increase in hourly pay if it meant eliminating tips.

Over 68% of restaurant staff said they would not take an increase in hourly wage if tipping were removed. This isn’t surprising, as a past Upserve study indicated that 97% of servers preferred tipping as their payment method.

Restaurant labor laws are designed to safeguard the rights of foodservice industry workers. As a manager, it’s your duty to enforce and comply with both federal and state regulations to protect your people (and, let’s be honest, yourself).

The Fair Labor Standards Act (FLSA) is the north star when it comes to things like minimum wage, overtime, and recordkeeping. For example, the federal minimum wage is set at $7.25 per hour; this means that unless a local or state law mandates otherwise, all employees will be paid at least this amount.

Staying in front of federal and state labor requirements is a must, not a should. Why? Because a misstep could mean shelling out serious cash to the Powers That Be. Fortunately, there are a few helpful tech tools to keep you compliant. Investing in a cloud-based POS system and restaurant scheduling software makes recordkeeping a breeze, and allows you to monitor things like when your employees are clocking in and out, whether they’re taking their scheduled breaks, and how close someone is to overtime. You can even generate labor violation reports to help you close the gap and eliminate painful penalties once and for all.

Some strategies to try

What most people don’t understand when a state or city raises the minimum wage is that it’s not all at once. In California, for example, the minimum wage increase is being rolled out in phases. So when the first phase occurred, the family behind Zov’s Restaurant cast a wide net to make up the increase in overhead.

“Some of our staff has been with us for 15, 20 years,” said Armen Karmardian, CEO of Zov’s Restaurants, now with five Orange County locations. “We sought alternative ways to drive the topline to increase the bottom line without imposing a ‘no tipping’ policy that didn’t fit into our version of hospitality. We need to retain top level servers if we are to stay true to who we are and keep our guests at the forefront.”

Zov’s Restaurants looked for high volume items that every table might order, such as iced tea, and increased the price by mere cents. It also marketed take-out orders, corporate delivery catering, and special events. When the second phase arrived, they looked at their foot traffic and modified inefficient hours of operation, shortening their open-time by three hours. With multiple restaurants, they have also been able to use their volume to negotiate contracts with vendors to get a reduction in costs based on buying larger quantities.

This type of creativity and bargaining is happening at restaurants across the country as eateries confront the rising cost of labor as a result of minimum wage increases.

Some restaurants are trying to add a nominal support charge to help cover costs. “It’s definitely going to be a challenge setting up new expectations with our guests,” said Leonard Chan, owner of Iron Press, Roiling Boil and Blind Rabbit, all food venues in the Anaheim Packing House, a popular gourmet food hall and premier OC destination. “We feel like this is a better solution than a blanket price increase across the board which would be larger than the small percentage.”

A tale of two service industry professionals in Minnesota

Ginger Jentzen, a former server who became the executive director of 15 Now Minnesota, an organization advocating for raising Minnesota’s minimum wage to $15 per hour, believes the wage should increase regardless of whether the position receives tips or not. “Most tipped workers are women and low wage jobs are disproportionately filled by women and people of color,” Jentzen said. “Seven of the ten highest poverty wage jobs are in the restaurant industry.”

On the other side is Sarah Norton, a career server and founder of Service Industry Staff for Change, a loose coalition of service industry professionals weighing in on issues that affect local restaurant and foodservice businesses. She wants an increased minimum wage, too, but with an exception for tipped workers. “Employers depend on the tipped model, that’s the system that’s been set up,” she says. “You can’t just come in 40 years later and change that. We are 100 percent opposed to eliminating tipping – hands off our tips.”

The parties advocating a $15 minimum wage across the board say figuring tips into the equation is a “tip penalty.” The service industry professionals and restaurateurs supporting a minimum wage floor that figures in tip amounts refer to it as a “tip credit.” But Minnesota state law explicitly states that tips received by an employee can’t be counted against the employer’s minimum wage obligation.

In 2019, employees of large businesses in Minneapolis will be paid at least $9.86 an hour, up from $9.65 that was required for 2018. However, in St. Paul and in Minneapolis, a $15 per hour citywide minimum wage was approved, and will be phased in over the next few years. But those city councils also chose not to include any exception for tipped workers, despite lobbying from restaurant owners who advocated for a tip credit.

For restaurants, one thing is clear: margins might be tight, and minimum wage shifts will impact your bottom line one way or another.

Surviving the minimum wage laws, and the yearly increase, demands restaurateurs find creative solutions. They must stand behind their business philosophy and obey changes in laws they can’t always control, all while keeping their customers’ experience a priority.

This article was republished from Upserve – Restaurant Industry. You can view full survey results and read the original article here