According to Forbes, there are many common pitfalls that strike managers across all professions: micromanaging, dealing incorrectly with problem employees and losing focus. A restaurant kitchen, with its mix of personalities and dangerous equipment, is an interesting microcosm of the entire entrepreneurial experience — including the move from front lines to managing your former peers and the next generation, as well as handling day to day disasters and long term administrative challenges.

Toronto chef Steve Gonzalez has spent 30 years in kitchens, starting from slinging buns and fries at Canadian chain St. Hubert at the age of 13 to his current multi-storey restaurant, snack bar and event space Baro. From his early experiences with Hilton hotels, golf clubs and banquet/wedding spaces at The Old Mill in Toronto, Gonzalez learned the institutional side of cooking and management. He worked for local celebrity chef Claudio Aprile periodically for 15 years, first at molecular gastronomy temple Colborne Lane, then Aprile’s back to basics Origin. He has a three year stint at ownership with Valdez, which ultimately closed down and relocated, transforming into Baro. In between, Gonzalez kept the brand moving with a food truck, pop ups, and even appearing as a contestant on Top Chef Canada. During a recent phone interview, he shared some of the hard won tips he’s learned along the way about management from the school of the restaurant kitchen. 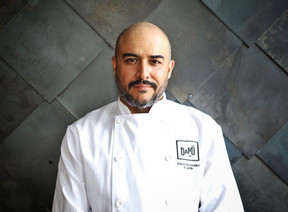 Restaurant margins are often razor thin, and with rising prices in food and labor, it’s important to separate budgetary concerns from any sense of nostalgia. “You’ve got to hit your numbers, or you’re not going to survive,” says Gonzalez. “And when it comes to labour costs and food costs, it sucks. Emotionally, you grow attached to people and products and dishes, and sometimes you’ve got to make decisions for the better of the business and it can’t be personal.”

2. Forget about the dream space

Similar to shopping for a house, falling in love with a restaurant space can be a risky, as well as expensive, mistake. Gonzalez looked for the perfect spot for Baro for three years, finding nothing but disappointment along the way. “You can have one in your hands and you’re ready to sign the deal, and something just doesn’t seem right — listen to that feeling,” he says. “You can’t get emotional over a space and say ‘This is my dream, it’s got to happen.’ Your restaurant space has to make sense, financially and physically, because if you buy a fixer upper, how much work can you realistically do?”

The life of a chef often means celebrating other people’s milestones while ignoring your own. Major holidays, birthdays and anniversaries are spent in the kitchen making sure that someone else’s night goes perfectly — and that often means sacrifice. “No matter what  you’ve got going on in your life, you need to show up for work,” says Gonzalez. “For thirty years, that was my life as a cook.”

4. Being hands off is a hard lesson to learn

One thing managers often miss is the hands on component of their work — overseeing someone else’s achievements is not as tactile as accomplishing the task on your own. As a manager, Gonzalez still misses the elements of service, and has had to come to an understanding with his kitchen staff. “I’m not allowed to do prep: I change the recipes, and I cut something different, and someone else will get in trouble for it,” he says. “I made a rule with my sous chef, that forbids me from prep, but I’ll do service for however long it’s needed.”

As a head chef, running the kitchen is a natural extension of your skill set, much like the move to middle management in the business world. As an owner, however, suddenly the chef is overseeing not only the kitchen crew but also the front of house staff and other areas that they may be out of their realm of comfort. Gonzalez stresses the need for upper managers to take a step back and think about how they are going to talk to people without getting emotional. “Don’t get me wrong.  I’ve had my moments where I just wanted to

kill somebody. I’ve come kind of close, and I’ve learned,” he says. Among the procedures that Baro has in place is communication via apps: the team uses the Slack app for sous chefs to communicate and Push for a managers-only channel.