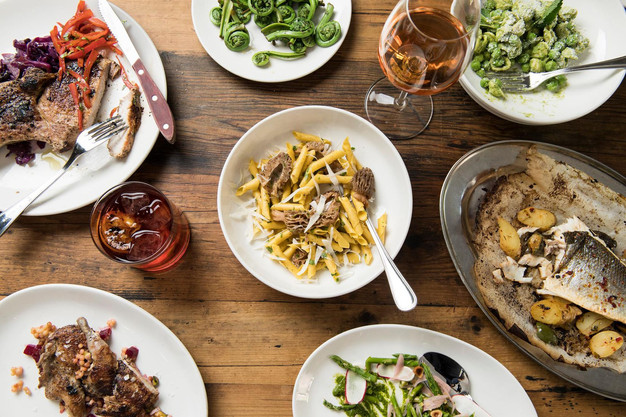 It’s never fun when a restaurant closes, and 2018 brought some particularly painful casualties. Diners are officially an endangered species, and the affordable neighborhood restaurant is flailing, too. Then there were the endless rent hikes — many restaurants hit the 10-year mark this year, and simply could not survive their landlord’s new asking price.

Iconic and influential places like Cornelia Street Cafe and Tortilla Flats as well as neighborhood destinations such as Pok Pok and Dell’anima were among the most lamented, just to name a few. This being 2018, the #MeToo movement hit the restaurant industry, and some restaurants closed following accusations against owners: Ken Friedman’s White Gold Butchers, North End Grill, and Mario Batali’s La Sirena.

The most significant restaurant shutters this year can be grouped into a few categories, including #MeToo hits, rent hike casualties, and long-time classics and diners. Here are the biggest restaurant closures of 2018.

After 45 years in Rego Park, Shalimar Diner closed in November. Co-owner Demi Karayiannis said that the restaurant, opened in 1974, would not have been able to sustain the new asking rent, especially with slowing business in recent years as diners have fallen out of favor.

“The neighborhood has changed,” Karayiannis said to the Forest Hills Post. “Our original customers got older, moved to Florida, and passed away — and different people have come.”

It’s indicative of a larger story of diners slowly biting the dust as they catch up with the realities of running a restaurant in 2018. Diners don’t take reservations, they aren’t a hot destination, there’s often no alcohol, and they don’t have dishes particularly suited to the niceties of Instagram.

Yet diners still persist as an affordable and non-judgmental holdout for diners of all stripes, from friends catching up to couples having a weeknight meal. Whenever one closes, people passionately decry the greedy landlord asking for too much money. And, yes, sometimes that is the case — but more often than not, those same people lamenting the closure are the ones not going so much anymore. So diners continue to perish, and this year was no different.

West Village Italian wine and pasta destination Dell’anima lasted 10 years in the neighborhood before closing this month. There may be no ending to this story more indicative of the times than this one: Owner August Cardona and chef Andrew Whitney will reopen the restaurant in a food hall in 2019.

After saying that “the business model of the small yet ‘elevated’ neighborhood restaurant — one that was unique just over a decade ago — simply no longer works in the current environment,” Cardona found that the food hall model would be able to draw out the life of this brand. Namely, he won’t have to maintain the building and rent is a percentage profit share rather than a monthly set amount. Gotham Market West will be Dell’anima’s new home, surrounded by other now-neighborhood staples like Ivan Ramen and Corner Slice.

But several of the places closing made a big impact while they were still open. Pok Pok pushed the popularity of Northern Thai across the city. Red Cat, which has been open in Chelsea for nearly 20 years and will close at the end of December, helped turn Chelsea into a worthy contender as a dining neighborhood. And Jim Lahey’s Co., which closed after close to a decade, was one of the early entries into the artisanal pizza movement — with Lahey’s mastery over dough contributing to the ambitious fancy pizza scene that exists in NYC today.

2017 brought bombshell misconduct accusations against restaurant-world superstars such as Mario Batali and Ken Friedman, and 2018 brought some fallout.

Batali’s Las Vegas restaurants all closed, and La Sirena in Chelsea will follow suit after December 31. Batali has yet to divest after more than a dozen women accused him of sexual misconduct and the NYPD announced a criminal investigation into his behavior. Business is still active at his other restaurants such as Babbo and Del Posto, but sources say business was slowing at La Sirena prior to the revelations about Batali. Those certainly did not help, and in July, La Sirena’s two top chefs left.

As for Friedman, he and former business partner April Bloomfield parted ways in June, with Friedman keeping the Spotted Pig and White Gold Butchers. That’s after Friedman was accused of behavior such as inappropriately touching staffers, asking for nude photos, and retaliating against people who complained; he denied allegations. Since then, Upper West Side butcher shop and restaurant White Gold Butchers has closed, with a notice in the window saying that Friedman and Bloomfield owed nearly $60,000 in unpaid rent as well as nearly $40,000 in unpaid invoices to an upstate farm, as of August. That’s in addition to former Breslin partner Ace Hotel suing Friedman for financial fraud in an ongoing $5 million suit.

Finally, hospitality world do-gooder Danny Meyer’s North End Grill was the subject of misconduct accusations this year against former executive chef Eric Korsh. The American-French restaurant will close by year end after more than six years in Battery Park City and several positive reviews. Meyer’s Union Square Hospitality Group did not say why it is closing the restaurant.

The shutter follows an Eater investigation that found that since Korsh started at North End Grill in 2014, staffers had reported him to human resources for inappropriate behavior such as unwelcome massages for employees. Multiple staffers alleged that USHG kept the chef in spite of repeated complaints. Korsh denied the accusations. He left at the end of 2017, and shortly after the accusations, the company announced the closure.

Public outcry was loud and swift for restaurants closing after decades in a neighborhood. Cornelia Street Cafe, Tortilla Flats, Great Jones Cafe, and Coffee Shop were such shutters, with food writers penning eulogies and regulars taking to social media to mourn.

Each had their different reasons for closing. The 35-year-old Great Jones Cafe’s owner died, while 41-year-old Cornelia Street Cafe and 35-year-old Tortilla Flats succumbed to rent hikes. Coffee Shop, open for 28 years, cited increased cost of doing business. But each served as respites from the increasingly soulless fast-casual openings and more expensive neighborhood newcomers. A common thread of each place was that they weren’t necessarily about the food, but about the space — a gathering place for locals, artists, and musicians to hang without pretense or judgment.