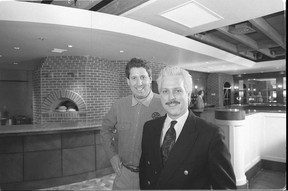 It’s the end of an era for Max Amore, which will close its doors next month after nearly 25 years in Glastonbury.

Max Restaurant Group’s upscale northern Italian restaurant, which opened in 1995 on Glastonbury Boulevard in the town’s The Shops at Somerset Square development, will serve its last meals June 30.

The decision to close “was, and is, very difficult,” said Richard Rosenthal, founder and president of Max Restaurant Group.

“We’ve had a phenomenal run … we have lots of very dedicated guests, employees and vendors,” he said. “But it’s kind of run its course a little bit.”

The restaurant’s lease is up later this year, and Rosenthal and managing partner Mark Conley said they’ve been negotiating with the building’s landlords for several years, considering several renewal scenarios. But Rosenthal said the 230-seat space would require a “major, major renovation” to continue with another long-term lease.

Though Max Amore will close, Max Restaurant Group still intends to expand its footprint in Glastonbury, with plans in the works for a future restaurant at a separate location in town. Rosenthal would not divulge much detail, as plans have not been finalized, but said the restaurant, a more casual concept, is slated to open in 2020.

“We had options, but our options were expensive,” Rosenthal said. “We really got to the point where we’d have to do a very large capital investment.” A full-scale revamp, including new decor, kitchen equipment and other upgrades, would likely cost $1.5 million or more, he said.

“With increased rent and the cost of renovation … with an investment like that, we’d have to increase our sales 10 to 20 percent to make it worthwhile. It just doesn’t feel like a good investment.”

Representatives for The Shops at Somerset Square could not be reached for comment.

Rosenthal and Conley said they would work to help place Max Amore’s 56 full- and part-time employees in positions with Max’s other restaurants in greater Hartford and western Massachusetts. Restaurant gift cards are valid for use at any other Max location.

Rosenthal and Conley noted that Glastonbury’s restaurant playing field has changed significantly in the years they’ve been open.

“It’s much different than it was 25 years ago,” Rosenthal said. “How people dine is different … the amount of restaurant seats that exist in Glastonbury compared to 25 years ago, it’s drastic. There were two or three of us and now there’s probably 20 of us. With a big restaurant, it’s hard to fill every night of the week.”

One of those additions to the Glastonbury dining scene was the group’s own Max Fish, an upscale seafood concept with a lively bar scene which opened next door to Amore in 2007. Conley said initially he’d wondered if Fish’s debut would cannibalize the business at Amore, but found that diners seemed to prefer one over the other.

“We really developed our own unique clientele over there [at Fish],” he said. “There’s a small percentage that go back and forth, much smaller than I thought when we first opened.”

Max Restaurant Group has not closed a location since 1996, and even then, that was more of a reset. That year, its first restaurant, Max on Main in Hartford, moved to CityPlace and became Max Downtown, now the group’s flagship.

Max Downtown closed for the summer in 2017, undergoing a multimillion-dollar renovation to modernize the space and appeal to a wider range of diners. That refresh, including an updated menu and new, expansive whiskey selection, has achieved its intended effect, Rosenthal said.

“We want to go out doing as good food as we did over the past 25 years,” Rosenthal said. “We’re not going out of business; we’re ending a run. We’re ending a beautiful run.”

“I’m extremely proud of the work we did here,” Conley said. “It’s far more emotional than you’d think it might be.”