Joe’s Restaurant reopened in Ithaca’s west end about 14 years ago, to great anticipation and fanfare, and this incarnation draws to a close next month. A staff member tells us Joe’s will close on September 21st.

Originally opened in 1932, the family-friendly Italian restaurant has had several owners, including Mark Campagnolo, who left to open the BoatYard Grill about twenty years ago. His former partner closed that version of Joe’s not long after, and it stayed empty for about five years. 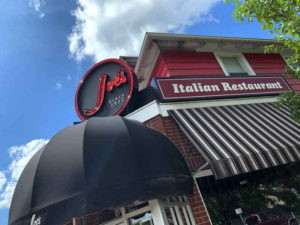 Most recently, the business was reopened by Jamie and Heather Ciaschi, who moved back to town about 15 years ago. (Jamie comes from a long line of Ithaca restaurateurs.) The business, H&J Hospitality, has also opened a catering business on East Shore Drive in Lansing, expanding on the takeout and catering business they were doing based in the restaurant. (There was also, briefly, a separate Joe’s Carryout location a little further west on West Buffalo Street.) Joe’s has been for sale for several months.

The restaurant had long been known for the bottomless salad and breadsticks that came with each entrée, and while those are now sold separately, they’re still a vital part of the Joe’s experience. They’ve focused more recently on pizzas and bar appetizers, which don’t lend themselves to salad and breadsticks as complimentary accompaniments.

The owners haven’t responded to inquiries about plans for the restaurant or the building, so all we can say for sure at this time is that the current restaurant will close at the end of business on Saturday, September 21st.

For now, find Joe’s where it’s always been, several blocks west of Downtown Ithaca at 602 West Buffalo Street at the corner of Route 13 north, or joesithaca.com, or call 607-256-DINE, and tell them you heard about them here. The restaurant is open Tuesday through Sunday for dinner, plus Friday through Sunday for lunch.