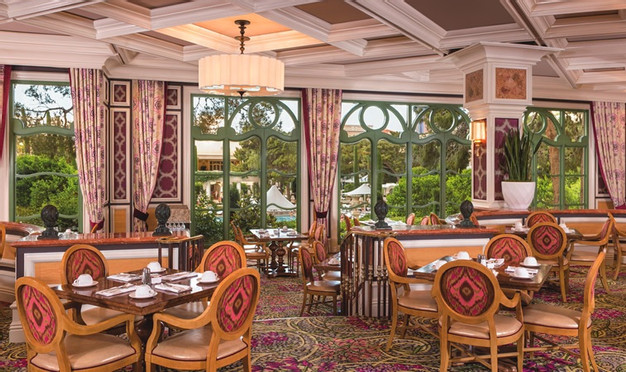 The inevitable happens all the time in Las Vegas; another restaurant or bar closes. Some come as no surprise. Others break the hearts of fans. Here, a look back at some of the saddest restaurant closings of 2018.

Wolfgang Puck pulled up stakes at the Forum Shops at Caesars to make the move to the Bellagio. Spago, the landmark restaurant that ushered in an era of celebrity chefs in Las Vegas created an entirely new look for its Bellagio location that practically sits on top of the fountains. Diners can still find his favorites on the menu at the new location.

The Country Club, the steakhouse overlooking the golf course at Wynn Las Vegas, closed on Jan. 14 since the resort started construction on Paradise Park, the $1.5 billion new lagoon, water sports facility, convention center and hotel surrounded by sand beaches over 140 acres. Most of those plans were dropped, but the restaurant with its jazz brunch and killer French dip never returned.

The resort on Sahara Avenue that all things Chinese to Las Vegas lasted less than a year. Early 2018 brought quick closures of Dragon’s Alley, the night market at the resort, Pearl Ocean with its dim sum menu for lunch and dinner, Phoenix with a focus on modern Chinese fare, and Bao Now with its casual dishes.

Giant chocolate fountains didn’t keep pastry chef Jean-Philippe Maury in Las Vegas. Both of his bakeries on the Strip closed in early 2018. Jean Philippe Patisserie at Aria re-branded itself as Aria Patisserie and his original outpost at the Bellagio turned into the Bellagio Patisserie.

A famous chef leaving Las Vegas is always a sad occasion, even when the shutter was anticipated for year. Pricey sushi and teppan at Aria at BarMasa and Tetsu from Masa Takayama departed the resort on April 2, and a celebrity favorite out of Los Angeles and New York City, Catch, took its place.

Carla Pellegrino, the chef and owner behind Bratalian Neapolitan Cantina in Henderson, closed her restaurant in May. On Facebook, she told fans that the rent became a “heavy burden,” and decided not to renew her lease. Pellegrino ended up moving to Yosemite National Park to run The Majestic Yosemite Hotel.

First, Chada Street with its Thai street fare closed in March. Then its sister restaurant Chada Thai & Wine bows out after almost six years on May 26. Never fear. Bank Atchawaran, the man behind the restaurants, opens Lamaii soon in Chinatown.

Border Grill’s second location in Las Vegas closed on May 15, just days after the final events of Vegas Uncork’d. Owners Mary Sue Milliken and Susan Feniger announced the shutter of Border Grill at the Forum Shops at Caesars on their website. They still operate the original Border Grill at Mandalay Bay.

Almost all signs of disgraced chef Mario Batali’s restaurant empire in Las Vegas disappeared after July 27. His business partner Joe Bastianich announced that three of the duo’s restaurants close at the Venetian, Palazzo, and Grand Canal Shoppes, an announcement that came less than a week after 60 Minutes revealed new sexual misconduct allegations. Employees at Carnevino at the Palazzo, B&B Ristorante at the Venetian, and Otto Enoteca e Pizzeria at the Grand Canal Shoppes learned that the restaurants would close via a letter from B&B Hospitality Group partner Bastianich, the Las Vegas Review-Journal reports. Bastianich says Venetian/Palazzo parent company Sands Corp. decided to end the leases for the three restaurants, which employ almost 300. Of course, Batali still has ownership in Eataly, the 40,000-square-foot Italian market with a range of restaurants, that just opened at the Park MGM.

The highly praised Yonaka Modern Cuisine debuted on Jan. 21, 2013, close to the intersection of Decatur Boulevard and Flamingo Road and quickly earned a loyal following for its casual ambiance and affordable pricing, combined with a dedicated approach to Japanese dining. Owner Ramir DeCastro expanded to Henderson last September, creating the Purple Potato, then converted into Yonaka by Chef Ramir on Flamingo Road in March, abandoning the earlier menu and creating an 18-course kaiseki menu, only available four days a week, priced at $125 per person and serving “seasonal, exclusive and exotic ingredients.” Within three months, the handover to the new Thai restaurant Sawaddee was in place.

Andre’s Bistro & Bar closed for good in December. The two-year-old restaurant was an ode to chef Andre Rochat, one of the pioneers of the fine dining scene in Las Vegas He opened his original restaurant in Downtown Las Vegas in 1980. That moved to the Monte Carlo and closed in 2016. He also had Alizé at the top of the Palms, now home to Vetri Cucina.

James Beard Foundation award-nominated chef Rick Moonen, dubbed the “The Godfather of Sustainability,” closed both of his restaurants at Mandalay Place in November. RM Seafood and Rx Boiler Room both closed. Moonen opened RM Seafood 14 years ago on Valentine’s Day, while Rx Boiler Room scooped out the upstairs of RM Seafood in 2013 as more of a lab for Moonen to play with food and drink. He announced plans to open a new off-Strip restaurant.