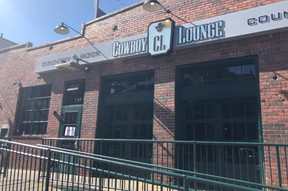 One of Denver’s most happening streets for nightlife will now offer two less partying options as Tavern Downtown and its country neighbor, Cowboy Lounge, have both closed.

Signs posted on the doors of the two closed establishments, which were located along the Market Street strip of bars one block from Coors Field, provide notice of the closure and invite customers to visit the other bars and restaurants owned by the Tavern Hospitality Group that owned them. Those remaining THG establishments include the four other still-open Tavern locations in Platt Park, Lowry, the Denver Tech Center, and Littleton.

But it was the the downtown Tavern, which opened in 2006, that had the unique distinction of being both a popular pre- and post-game spot for those heading to Coors Field and a raucous destination for the booze-binging crowds that descend on LoDo on weekend nights. Tavern’s website also touted that its downtown rooftop was once named one of the top 10 rooftops for food and drink in America by Playboy Magazine.

Meanwhile, Cowboy Lounge, which opened in 2007, was known for its country-meets-nightclub atmosphere, numerous TVs, and three bars.

Eater Denver has reached out to the Tavern Hospitality Group for more information about the reason for the closures but has not received a response.

It appears, however, that even more change could eventually be afoot on the fabled Market Street bar strip. In July, BusinessDen reported that the new owners of LoDo’s Bar & Grill, are seeking to turn the local chain’s original bar into an outpost of the Dierks Bentley’s Whiskey Row restaurant chain. The original LoDo’s is located at 1946 Market Street, just across the street from the closed Tavern and Cowboy Lounge.

The website for Dierks Bentley’s Whiskey Row markets the restaurant as an “American gastropub” with “award-winning food and drinks, exhilarating nightlife, and a rock & roll attitude inspired by Dierks himself.” The chain has four existing locations in Tennessee and Arizona. Bentley licenses his name to the Arizona-based Riot Hospitality Group, which owns and operates the restaurants.

BusinessDen reported that it learned of the plan from development documents submitted to the city by the new ownership group, which purchased the LoDo’s restaurants in LoDo, Westminster, and Highlands Ranch last year. The documents indicate the new owners also want to add a story to the existing LoDo bar structure and build on the parking lot that neighbors the restaurant. The new ownership group includes Kenneth Monfort, the son of Colorado Rockies co-owner Charlie Monfort.

In July, Monfort told BusinessDen he and co-owners Jason Marcotte and Matt Runyon of Summit Hospitality Group were in “an exploratory phase” regarding the future of the building.

However, a representative of LoDo’s told Eater on Monday that the Market Street LoDo’s will not be closing at the end of the month or year as some have rumored. Instead, it will remain open for the “indefinite future.” That email was sent in response to an email from Eater inquiring about the restaurant’s status. The email, which was from the LoDo’s administrative account, also noted that there is no official date for LoDo’s to close to make way for Whiskey Row.