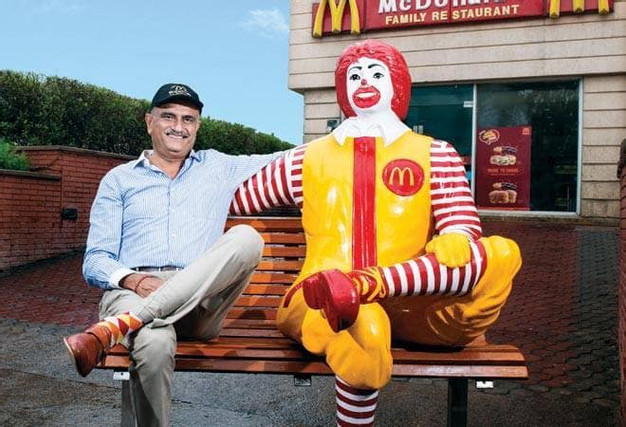 McDonald’s announced it has reached an out-of-court settlement with its estranged partner in India, Vikram Bakshi. The US-based fast food major has bought out the stake of Bakshi in Connaught Plaza Restaurants Pvt Ltd (CPRL) that operated chain of McDonald’s restaurants in north and east India. The company, however, did not disclose financial details of the settlement.

With the completion of the deal with Bakshi, CPRL is now wholly owned by McDonald’s India Pvt Ltd (MIPL) and its affiliate (McDonald’s Global Markets LLC, “MGM”), the company said in a statement. Under the agreement, MGM has acquired the 50 per cent voting equity shares in CPRL that were held by Bakshi and his affiliated entity since the inception of the joint venture. McDonald’s India will continue to hold its 50 per cent voting equity shares in CPRL.

After the settlement, Robert Hunghanfoo has been appointed as the head of CPRL. “Accomplishing a mutually agreed settlement in this matter means that our customers can now look forward to a reinvigorated, consistent and uniquely McDonald’s experience when they visit us,” Hunghanfoo said in the release.

McDonald’s outlets in north and east India operated by CPRL have been temporarily closed to conduct a comprehensive assessment of operational protocols and employee training. The existing managers and staff of these restaurants will reportedly remain in the company’s employment during this temporary closure. They will also be actively involved in steps taken to re-open the restaurants.

“Our top priority is to deliver the highest quality restaurant experience to our customers. While we are confident this will result in the best possible experience for our customers, we sincerely regret any inconvenience the temporary restaurant closures may cause,” Hunghanfoo said.

The story of CPRL began in 1995 when Bakshi and McDonald’s formed a 50:50 joint venture to run McDonald’s outlets in India for a period of 25 years. Their ties turned sour in 2008, when the Chicago-headquartered company tried to buy out Bakshi’s 50 per cent stake. State of affairs worsened five years later, when Bakshi was removed as the Managing Director of CPRL. The National Company Law Tribunal (NCLT) subsequently reinstated him and also refrained McDonald’s from interfering in the functioning of CPRL besides appointing an administrator to oversee its operations.

Then, in August 2017, McDonald’s terminated CPRL’s franchise agreement citing non-payment of royalties. As per the termination notice served by the US-based fast food company, these restaurants were barred from using McDonald’s brand name, trademark, design, operating and marketing practices and policies, food recipes and specifications after September 5, 2017. But Bakshi had stuck to his guns and continued using the brand and operating the outlets as usual, while battling it out with McDonald’s in various legal forums including NCLT, NCLAT and the Delhi High Court.

On Monday this week, McDonald’s and Bakshi had told the NCLAT that they are working towards an out-of-court settlement, to bring their 5-year-old dispute to a close.