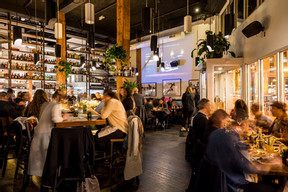 Kaya, a Market Street restaurant partnership between chefs Nigel Jones (of Oakland’s Kingston 11) and Daniel Patterson’s Alta Group, has closed. The restaurant announced the news on its website, thanking customers for their patronage over the last year-and-a-half of business.

Kaya replaced the original location of Patterson’s Alta restaurant, breathing fresh life into the space across from the Twitter building in a growing tech corridor. “I want the customers to feel like they get transported from Market Street and into a Caribbean zone,” Jones said as the restaurant opened. Rum drinks, jerk chicken, and salt cod fritters helped produce that effect. Kaya was also a breath of fresh air in San Francisco for its explicit goal of promoting chefs of color, who are often underrepresented in the city.

To Jones, Kaya’s run was a successful one. “I was more than happy with the first year,” he told Eater SF. “I feel really confident about what I’ve done and how the city responded to it,” he added, citing good business and strong community support.

Kaya was the first in a series of now uncertain partnerships for the Alta Group: After Market Street’s Alta became Kaya, Patterson gave over his Dogpatch location of Alta to chef Heena Patel, who made it a home for her Gujarati cooking as Besharam. But last month, Patel announced that her partnership with the Alta Group was over, and that she would be operating Besharam independently.

Meanwhile, in Oakland, Alta Group runs Dyafa with chef Reem Assil, and in San Francisco, it’s now pursuing a partnership with the chefs behind Guamanian restaurant Prubechu to replace Mission District restaurant Aster. Finally, the fate of the restaurant group’s plan to open another Alta in San Francisco as it was originally conceived — a new American, Californian concept — is unclear. Patterson had been planning an Alta for the Mid-Market Yotel, near the location of Kaya: Now, he’s retaining the lease, but pursuing a different idea for the space, representatives say. A lone Alta now operates in Los Angeles, where it’s been well-received.