After 22 years in business, the Perkins restaurant and bakery on North Reserve Street in Missoula closed for good on Thursday. Owners Ken and Rikki Sanders sold the building to new owners, and longtime customers believe a new brewery, taphouse or restaurant may be in the works.

Skovlin is the current President of the Missoula Breakfast Forum Toastmasters Club. They meet every week at 6:30 in the morning for coffee and breakfast at Perkins to help each other improve their public speaking and leadership skills.

“We met there every week for almost five years,” Skovlin said. “(Perkins’ owners) have graciously provided a wonderful meeting space. Our club will miss meeting there. We have appreciated the friendly service of the employees and the ample and easy parking.” 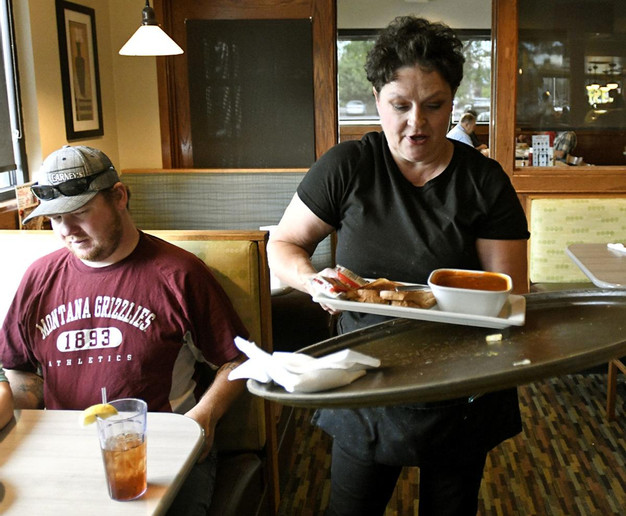 “Amenities that Perkins has offered, such as early breakfast hours, parking, its geographical location, a waitstaff that is attentive to customers, and a comfortable atmosphere wherein patrons can carry on a conversation and not have to compete with loud music, have created a setting that cannot be easily replaced,” she said. “Perkins will be sorely missed by these patrons.”

“Sometimes the music is so loud you can’t carry on a conversation,” she explained. “You wonder who they’re serving. Maybe people are too busy on their devices to even care? Is it the staff? In which case, who are they there to serve? Especially for older people, it’s tough. It puts the customer in a difficult position to ask to turn the music down.”

Karla Dauenhauer has been a server at Perkins in Missoula for all 22 years.

“I’m going to miss the people the most,” she said, taking a few precious seconds away from her customers to talk to a reporter.

The place was packed Thursday morning, with a line of people waiting to be seated at the door. Hats with American flags, groups of elderly patrons, teenagers and motorcyclists could all be seen coming and going.

“I have so many regular customers, people who have been coming here for years and years,” Dauenhauer explained.

Owner Ken Sanders said the store employs around 45 people. He and his wife posted a note on the door announcing the closure gave them “sadness in their hearts.”

Sanders declined to say what the new owners plan, but several longtime customers told the Missoulian they’ve heard it’s going to be a new brewery or taphouse.

“I wish the best to the employees of this restaurant, some of whom have worked there for many years,” Skovlin said. “The closure of Perkins is a case of not fully appreciating what we have until it is gone.”

Article Written by David Erickson at the Missoulian https://missoulian.com/news/local/perkins-restaurant-closes-after-years-to-make-way-for-rumored/article_936bb934-1b82-520c-aad5-5ccdb7ae4073.html

Photo Courtesy of the Missoulian