Six quarters in a row of year-over-year declines.

Food sales were down, alcohol sales were down. The only thing that was up was prices, but it wasn’t enough to make up for the decline in guest count: the average amount per check rose just 2% in June.

“Brands seem to be reluctant to implement significant price increases given the current environment. Price promotions have been widely utilized, especially by struggling brands and segments to drive traffic,” said Victor Fernandez, Executive Director of Insights and Knowledge for TDn2K, whose Restaurant Industry Snapshot tracks sales at 27,000 restaurant units from 155 brands, generating about $67 billion in annual revenue.

How bad is the problem for chain restaurants? So bad that this decline was in fact “good news,” after all the even worse declines in prior quarters. Q2 was the least bad quarter since Q2 2016!

But for the wrong reasons, according to Fernandez: “The reality is that we are also lapping over some weak results in 2016 which make the comparisons much easier for the industry in 2017.”

As always, there are glimmers of hope, but not really, according to Joel Naroff, president of Naroff Economic Advisors and TDn2K economist:

“The summer season should be solid as people have money to spend. Unfortunately, until wage gains improve, which so far continue to be disappointing, no major acceleration in spending at restaurants should be expected.”

The high end – fine dining – was the top performing segment, according to the report, as “affluent restaurant consumers continue to respond positively to those brands that provide a more experience-driven dining occasion.” The upscale casual segment was the second best performer.

Those were the only two segments with same-store sales growth in the quarter. But even those two segments only got that growth due to increases in their average guest checks. So price increases. Even at the high end, same-store guest counts declined.

The weakest segments were fast casual and the bar-and-grill sub-segment within casual dining. Quick service, after having been a top performer in 2015 and 2016, has now booked three quarters in a row of same-store sales declines.

But the overall restaurant and bar business – “food services and drinking places,” as the Commerce Department calls it – isn’t doing that badly. 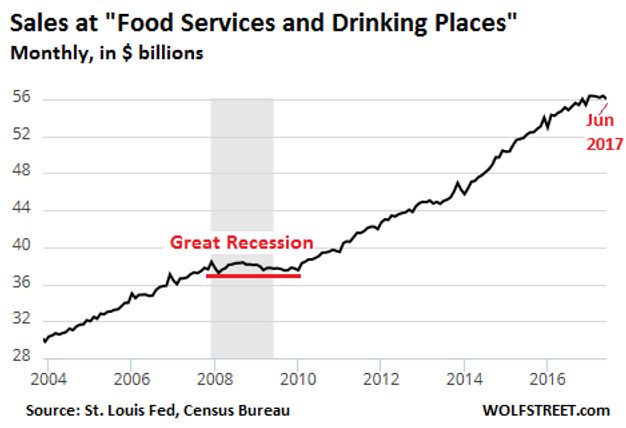 The industry didn’t get crushed during the Great Recession, unlike the car industry which collapsed, with sales plunging by over half. Instead, restaurants went into a relatively mild 30-months downturn: Sales peaked in December 2007 at $38.4 billion, then fell 3% and stayed below the December peak until March 2010. This is a fairly stable industry.

So why are chain restaurants getting hammered when the rest of the industry is not? The report sees growing competition and changing consumer preferences. And each of them eats, so to speak, into the market share of chain restaurants:

The surge of independent restaurants. This is particularly true in cities like San Francisco, Seattle, or New York, but also in many other cities. It includes the entire spectrum, from very high-end to delis that are proud of their sandwiches and other foods.

Red-hot VC-funded meal replacement kits. This includes Blue Apron, one of the most anticipated IPOs this year though it will never make money, and whose shares since going public on Tuesday have plunged 26% below the IPO price.

Food trucks. They’re everywhere and nowhere. Sometimes they show up in front of your office. Other times you have to follow them on Twitter to figure out where they are.

Chain restaurants have another problem: many are worn-out concepts. They were cool 30 years ago. And they’re still around, zombie-like, living on borrowed money, trying to keep their prices down by using ever cheaper ingredients and processes. Millennials might never have seen one from the inside. On the other hand, new concepts have sprung up that are thriving and expanding, but the zombies are weighing down the averages. So the averages don’t tell the whole story.

All this is playing out when discretionary spending, which restaurants rely on, is being whittled down by rising costs of living, including soaring costs of healthcare, college, and housing. Many consumers are buckling under the weight of their student loans. And in this environment, mediocre chain restaurants are going to have a hard time.