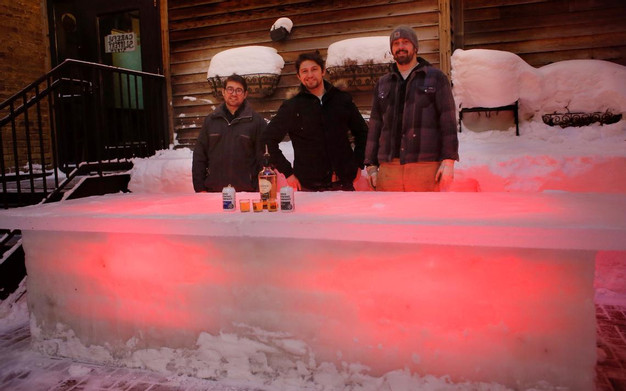 FARGO — When it’s 30 degree outside in the fall, everyone wants to head indoors.

However, when 30 degrees hits in the late winter, everyone wants to be outdoors.

That’s the theory behind a unique ice bar that Twist owner and manager Josh Goedtke has built on the downtown restaurant and bar’s patio that in the summer is filled with customers enjoying a much warmer climate.

He’s hoping now that customers will take some time to enjoy the colder climate in the coming days when temps are expected to reach into the 30s by the weekend. He’s expecting a big crowd to join them outdoors when they will be open all day on the patio for the Fargo-Moorhead St. Patrick’s Day parade and celebration when it arrives in just more than a week.

Goedtke and two others, bar manager Zach Taylor and artist Kingsley Permenter, started on the project to beat the cold about two weeks ago.

The three built forms and filled them with slush made from the snow on the patio and water. They then allowed the chunks of slush to freeze, repeated the process and stacked them on top of each other until the bar built of solid ice took shape. The final touch was a large bar top that they just completed over the weekend.

Goedtke said they originally wanted to do it earlier and have a “winter ball” celebration on the patio but they felt it was just too cold for that with average temperatures in Fargo about 18 degrees below normal in February.

“Instead of complaining about the weather and snow, why not try doing something outside and be out in it,” said Goedtke about another reason for undertaking the effort.

For the three it was a good time, too, building something likely never matched on the Fargo-Moorhead bar scene.

“It was like big kids building a fort,” Goedtke said.

The patio setting will also include seating made of snow. They formed benches in the snow piles on the interior walls of the patio and plan to use wooden boards to sit on. There’s also a large circular seat in the middle of the patio that people can sit on as well as a few bar stools added next to the ice bar itself

Twist has been open about 2 1/2 years at 220 Broadway in the building that has been a longtime restaurant and bar location, including formerly Monte’s and Sazerac Alley.