Royal Oak's Bean & Leaf Cafe abruptly closed, the latest to do so in a changing city

Detroit, MI – There’s been a lot of hand-wringing about changes in Ferndale lately, which has even inspired a guerrilla art campaign: “Don’t Royal Oak my Ferndale.” But it seems Royal Oak isn’t done Royal Oak-ing itself.

The Bean & Leaf Cafe (106 S. Main St., Royal Oak) is the latest downtown business to shutter amid the city’s changing business landscape. According to a sign posted in the coffee shop’s window, the business abruptly shuttered on March 31. 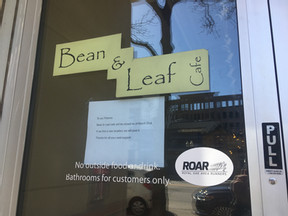 The business had been under new ownership since 2015. It probably didn’t help that there was a Starbucks nearby, as well as Atomic Coffee. Plus, Dessert Oasis Coffee Roasters opened directly across the street from the Bean & Leaf within the past year.

The Bean & Leaf news follows other Royal Oak closures announced in the past year, including the downtown Andiamo, whose owner cited parking issues and rent increases for the reason the location was closing. Royal Oak Mayor Michael Fournier responded that closure had “nothing to do with parking and landlords, but perhaps everything to do with the product.”

Nevertheless, other downtown closures were soon announced, including Cantina Diablos, the B Spot, Beirut Palace, and Blackfinn Ameripub. Outside of downtown, Italian restaurant Pasquale’s recently served its last plate of spaghetti and meatballs after more than 65 years in business.

That said, Royal Oakers will not starve: a slew of new businesses have either already opened or are set to open in Royal Oak. Milford-based Proving Grounds Coffee plans to open a Royal Oak location this summer. The former Cantina Diablos is now Diamond’s Steak & Seafood and rooftop bar Pinky’s, Andiamo will be a new American restaurant under new Chicago-based owners, and Blackfinn is now a Bar Louie. Other already open or soon-to-open restaurants include Vera Asian, Sake Sushi, Kaizen Ramen, and City Ramen.