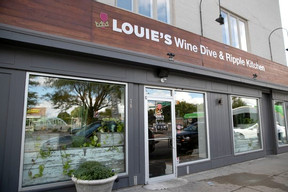 Three restaurants in or near Broad Ripple have closed, following Taste of Havana’s pending departure from the neighborhood’s main drag.

Remsburg deferred details about the Broad Ripple closing to the chain restaurant’s corporate headquarters, but he said the plan is to focus on the Mass Ave. location while the company contemplates opening another Louie’s somewhere in the Indianapolis area.

“We can confirm that construction on the Red Line did impact our traffic and sales, but that is not the sole reason for the closure. We would prefer not to comment further,” Louie’s Wine Dive President Whitney VinZant said in a written statement Sept. 23.

“As anyone who’s been in this industry knows, the restaurant business is full of difficult decisions, and unfortunately, it was time to throw in the towel at this location. We are working to find placements for our staff at other Louie’s locations, and we are optimistic that we will come back to Broad Ripple better than ever when the time is right.”

HoiTea ToiTea, 6285 N. College Ave., next door to Louie’s Wine Dive, ended Broad Ripple service on Sept. 15, according to a post on the tea house’s Facebook page. HoiTea ToiTea is still in business at The Fashion Mall at Keystone.

Owners Alexandra Nelson-Harris and Justin Harris have yet to answer IndyStar’s email requests for more information about the closing, but Harris said on HoiTea ToiTea’s Facebook page that the “redline construction certainly didn’t help one bit.”

“Through Broad Ripple we discovered who we are as a company and needed to refocus our efforts to grow.”

In April, Nelson-Harris told IndyStar that parking was another problem. “(The Red Line construction) is kind of exacerbating the pre-existing issue of not having parking,” she said. “It’s a turnoff for people to have to pay to park.”

The restaurant’s owner, Deidra Henry, has not returned calls asking for more information about the closing. In April, she told IndyStar that since Red Line construction first started, sales dropped 35 to 40 percent from the previous spring. Henry said the decline was a “drastic, drastic decrease overnight.”

Taste of Havana this fall moves from 815 Broad Ripple Ave. to 8329 N. Michigan Road at 86th Street near Big Lots. Owner Jorge Chalgub told IndyStar in late August that a combination of factors persuaded him to relocate the sandwich shop he opened with his daughter, Dayana Mireles, in August 2013.

Chalgub said he has seen his clientele change from a mix of office workers, families and students to mostly college students who are unwilling to spend much more than $1.50 on a Cuban coffee and are looking mostly for burgers, pizza and tacos. He also pointed to what he called the strip’s “beer culture.”

Increasing traffic congestion was another reason he decided to move. Plus, Chalgub said, the rent is cheaper at the Michigan Road location.