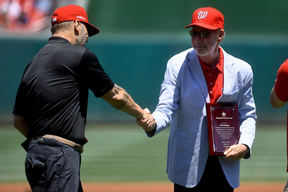 After more than two years of ownership, Tony Kornheiser has closed down his Northwest D.C. restaurant, Chatter.

Kornheiser announced the decision on Friday during “The Tony Kornheiser Show” podcast, which he hosts from a studio inside the restaurant.

“Chatter is closing for renovations and remodeling,” Kornheiser said in the episode, titled “Check Please.” “Whether or not it reopens I am not certain at the moment. I hope it reopens. But we are probably going to move on and do the show from a less-public area.

“I would say that I have enjoyed doing this show in front of live bodies more than anything I’ve ever done. The show’s gonna be fine and certain, selected people can come and watch it but’s going to be an entirely different circumstance.”

Everybody just decided it was time to move on.”

The “Pardon the Interruption” co-host and former Washington Post columnist announced on his podcast in January 2017 that he would purchase the Friendship Heights establishment then known as Chad’s (previously Chadwick’s) along with TV host Maury Povich, former University of Maryland men’s basketball coach Gary Williams and local businessman Alan Bubes.

Article Written by Jake Russell at the Washington Post https://www.washingtonpost.com/sports/2019/06/28/tony-kornheiser-announces-closure-his-dc-restaurant-chatter/?noredirect=on&utm_term=.e767a568828a