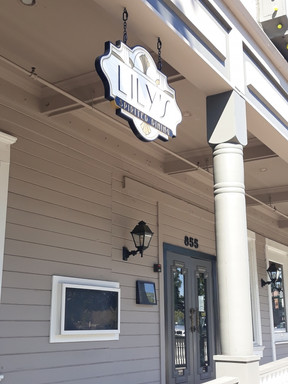 The Clubhouse and Lily’s Spirited Dining restaurants inside the Pleasanton Hotel both shuttered their doors without warning this week, less than a year after opening for business along Main Street.

Replacing the previous longtime tenant gastropub in the historic hotel building, both restaurants were seen as popular draws on the weekend but struggled to attract consistent crowds on weekdays.

A sign posted on the double doors of the Pleasanton Hotel on Tuesday morning thanked patrons for their support. The locked building was dark inside except for the bar, and the menus usually in the glass case next to the entrance outside were gone.

“With a very heavy heart, we announce the closing of this chapter in the glorious history of the Pleasanton Hotel,” the sign read. “We love our downtown, our city and our community, and are saddened by our departure. We certainly hope the Grand Lady will come back to life once more with all the grace and grandeur she possesses.”

The restaurants’ owner, Ed Westmoreland, told the Weekly that he and his staff “put their heart and soul into this place,” but there simply wasn’t enough business to make things work.

Both restaurants opened last fall on the first floor at 855 Main St., as well as a seasonal venture of Westmoreland’s called The Patio with a courtyard and outdoor seating. The restaurant space in the historic hotel, a marquee building on the north end of Main Street, had been empty for about half a year after Handles on Main Gastropub closed in February 2018 to end its nearly seven-year run there.

The Clubhouse was known for serving food, craft brews and local wines in a casual setting, and Lily’s Spirited Dining — named for the legendary ghost which some believe haunts the hotel — offered upscale dinner entrees. A banquet room on premises was also available for rental for business and social events.

“We could not generate enough revenue to sustain the business model or modify it when changes were needed,” Westmoreland said in a social media post announcing the closures.

He called the decision to shut down, “agonizing and heartbreaking.”

Westmoreland, who also operates the popular Eddie Papa’s restaurant on Hopyard Road, said he couldn’t “help but feel so disappointed in not succeeding at creating a lasting establishment” in the Pleasanton Hotel but remains proud of what everyone achieved together while they were open. “I am proud of what we did accomplish, as we did create new memories for so many people. I am proud to be a part of her history, even if it was just for a minute.”