Why Bangkok’s most popular Indian restaurant, Gaggan, has shut down 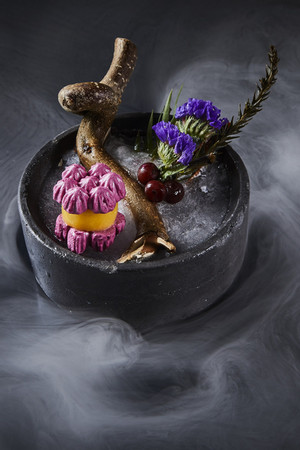 By the time you read this, chef Gaggan Anand will have served his last meal at the Lab, a special invite-only section inside his eponymous two Michelin starred restaurant in Bangkok. Located on the first floor, the Lab began with the aim of re-defining the term ‘fine-dining in late 2016, just a year after the restaurant was voted as Asia’s Best Restaurant in 2015 (a title it held for a record four consecutive years since then). It offered 14 random guests a three-hour interactive session with the chef.

Those who have been lucky enough to get a seat at the Lab will know the flow of events remains constant. At 9:30pm, an energetic Anand appears to greet guests and introduce his assistant chefs for the night (reminiscent of Freddy Mercury introducing the supporting members of Queen). He lays down certain rules that include minimal bathroom breaks and no phone calls. Fixed menus of 25 courses are then handed to each guest, displaying an ordering of only emojis. The sommelier introduces a large list of organic wines that will be consumed as the night progresses. Gaggan Anand takes centre stage and talks about his life, struggles and the early days, and even shares anecdotes on how he came up with each dish. Classic rock hits including the likes of Pink Floyd and The Foo Fighters are blasted through a very expensive sound system, often synchronised with the food courses. By the end of the three hours, 14 strangers are now best friends, singing along to rock music and jumping around their seats. And Anand can be found standing on the pass, waving a blow torch in the air to thunderous applause.

In the past couple of years, this rendition of fine dining got so popular that the Lab became the destination for some of the greatest culinary collaborations, attracting the likes of Massimo Bottura, Dabiz Munõz and Mauro Colagreco, who visited Bangkok just to cook at the Lab with Gaggan Anand.

But August 24 was different. It was an emotional day for the chef, who went on to win awards and break records. After service on that fateful night, Anand put down his blow torch, took off his chef’s jacket and bid adieu to the restaurant he gave a decade of his life to. In June this year, Anand, along with 65 team members, announced their resignation from the restaurant, and on August 25, the restaurant closed its doors permanently, much to the disappointment of food enthusiasts all over the world.

This drastic move brings an end to a chapter marred by bitterness between Gaggan Anand, a minority stakeholder in the restaurant, and his erstwhile partners in the venture. The two sides will go separate ways and, for gourmands, it will mean the end of a culinary era. But the future is not all grim: Anand took to Instagram to announce plans for a new restaurant in a heartfelt post. “I am not a perfect man. I have feelings, too emotional sometimes… I am just a human… With 65 lives of my team, I will carry their skills, potentials and experiences to my new venture,” he wrote.

This October, a new restaurant called ‘Gaggan Anand’ will open at an undisclosed location in Bangkok, led by the passionate chef and with the same team of assistants. Anand’s young daughter, Tara, will be the largest shareholder in the new project, and Anand promises that this ownership structure will allow him the freedom to take more risks and offer an even more provocative, passionate and elevated experience for guests.

Though the new restaurant will not automatically inherit Gaggan’s Michelin starsor global rankings, it will be a new challenge for the chef, a second innings and a fresh start.