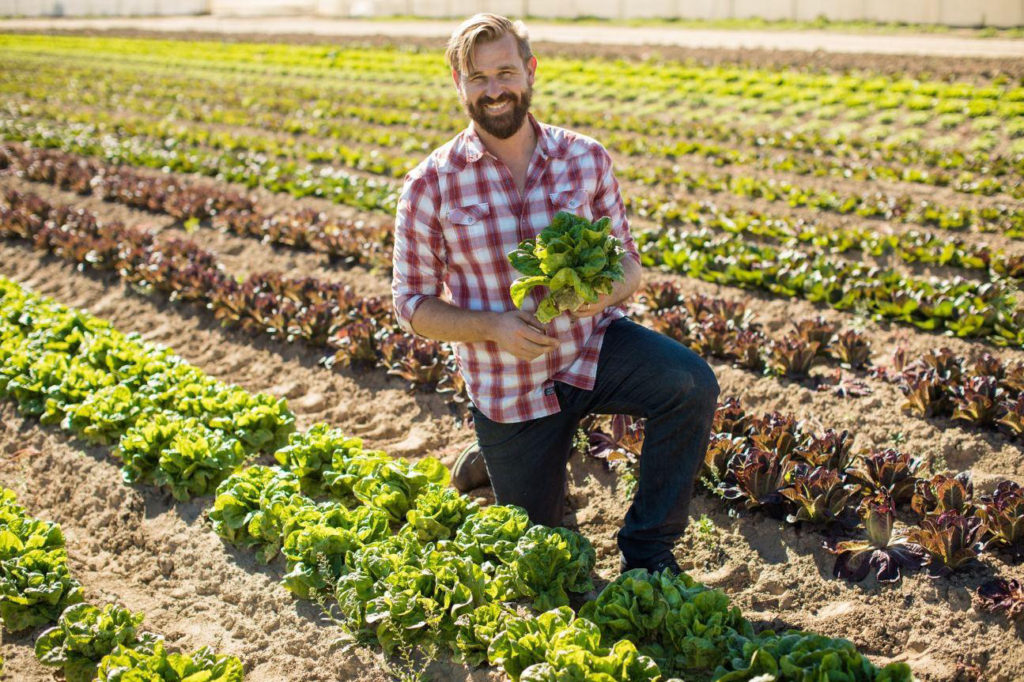 “If you wonder where I am, you can be pretty certain you’ll find me at the restaurant,” said Nathan (Nate) Peitso, with a rueful laugh. If you’d asked him a few years ago he might have said “at the farm,” because that’s been the family business: Kenter Canyon Farms and Maggie’s Farm. Regular Santa Monica (and other) Farmers Market shoppers will recognize these names.

But now Nate owns Farmhouse, a big, warmhearted, welcoming seasonal cuisine restaurant on the corner of La Cienega and 3rd Street, celebrating its first anniversary this Sunday. Nate grew up eating and cooking “farm-to-table,” so when partnering with Laurent Halasz, founder of Fig & Olive, it made sense for them to focus on that concept.

Nate says, “Ever since I was a kid when we were delivering our lettuce to places like Spago and Chinois on Main, I’d be looking around the kitchen, green with envy and wanting to play with food all day in this glamorous setting, with beautiful tablecloths, crystal vases and all that. But going back to the farm, even though I liked it, I knew it just wasn’t what I wanted to do with the rest of my life.”

Neither farming nor owning a restaurant, he says, are jobs you can do part-time. “I had stepped back from day-to-day operation of Maggie’s Farm when my father became ill and I began taking care of him.” Nate sports an all-caps tattoo on his left arm that says Bluenose, the name of his father’s boat, a place where they’d shared many happy memories.

Nate began handing over Maggie’s Farm to the family, and near the time of his father’s passing, Laurent said he had a lease on a 7,000 square foot space in a prime location. It was time for Nate to take the life-changing plunge.

Nate and Laurent met when Laurent needed a farm for a philanthropic project involving disadvantaged youth; they became instant friends. Laurent was renowned for taking small companies and building them into national concepts, given his experience with Fig & Olive and as Chief Financial Officer of Le Pain Quotidien.

Laurent’s name opens doors, Nate says, and “With the Beverly Center engaged in a half-billion-dollar renovation, they paid for the build-out of the restaurant,” a huge expense that made the deal a lot sweeter. “But as my first foray into restauranteering [his word], 7,000 square feet? To have so much space and have it be so beautiful; it’s like having your dreams come true, and remembering to be careful what you wish for, all at once.”

WHO’S IN THE KITCHEN?

Craig Hopson worked his way through such legendary New York kitchens as Le Cirque. When he was Chef de Cuisine at Picholine, the restaurant received two Michelin stars. He also earned credibility as culinary director of socially-conscious Everytable, which aimed to bring healthy, prepared low-cost meals to a more inclusive audience.

Nate did tastings with 18 different chefs, several of them flown in from New York and Chicago. “We were looking for a chef who could produce Michelin quality food that was sophisticated but who didn’t mind taking his lead from me, because it’s mostly my menu and my ideas of how I want the food to be.”

But, as Nate points out, “I’m an accomplished home cook but not a chef,” and Hopson taught him what could and couldn’t work. “We started looking at my planned menu and he said, ‘This is crazy, there’s no cross-utilized ingredients, this dish clashes with that dish, there’s no continuity.’ So we worked together to create a more harmonious menu that doesn’t involve a lot of waste or repeated steps for the crew; we had to really streamline everything, which I had never thought about.”

After some growing pains, “It’s producing great results. We know where each of us is weak and strong, with the understanding that the bottom line ends with me. He’s designed really great dishes that I like and he knows what I want on the menu. For example, right now we’re playing with asparagus, and he said, ‘I’ve got an idea for an asparagus dish I think you’re really going to like.’ And I did, it’s freaking fantastic! So it’s really blossomed into a collaboration that I treasure.”

Farmhouse LA is just the start. Nate and Laurent have signed a lease in Scottsdale, Arizona for a 5,500 square foot space that’s now in pre-construction at Fashion Square mall. Houston or Dallas, Boulder or Denver are also in their sights.

Staying true to the farm-to-table concept is key. He points out that “Arizona has some great tomato farms and Pima Indians are growing heritage wheat we can use for bread, and we will always choose the best available seasonal ingredients.

“I want to bring farm-to-table with quality-sourced ingredients to a larger market, to make it acceptable to people who don’t live in Los Angeles or San Francisco, and to present it unpretentiously. There’s a place for really fine dining, and that’s not us. We’re a place you can go get a great healthy meal, not break the bank and be comfortable whether you’re in a business suit or jeans.”

Sarah A. Spitz is an award-winning public radio producer, now retired from KCRW, where she also produced arts stories for NPR. She writes features and reviews for various print and online publications.