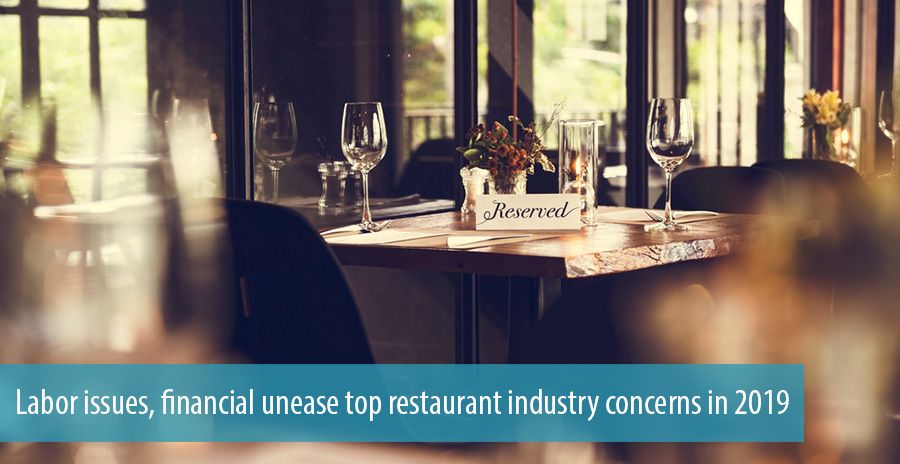 A new survey from global consulting firm AlixPartners has found that restaurant consumers are increasingly “jittery” about their finances, and supportive of significant minimum wage increases.

Most analysts expect that the US economy will moderate its growth this year and next, as the ending business cycle and a range of factors from interest rates to trade relations conspire to put a damper on the previous run of healthy economic expansion.

Consumers themselves can see what’s on the horizon: and though it’s not necessarily a recession that’s in the cards, lesser growth still means a bump in unemployment after record low levels, and a rougher financial road for many. Consumer confidence, as such, is likely to wane.

AlixPartners’ 2019 US Restaurant Outlook Survey polled over 1,000 consumers, and found that they were becoming increasingly concerned about finances – to the detriment of restaurant industry. Among those who said they expected to dine out less in the year ahead, the proportion who chose a financial concern was up 8% compared to last year. Moreover, 49% said they plan to reallocate savings toward purchases other than restaurant meals, while 30% said that restaurant meals are too expensive.

A further 30% of respondents said they need to cut back on spending because of their current finances, while 15% said they’re concerned about their future finances.

The AlixPartners survey also revealed that millennials are more financially concerned than older cohorts: the share of millennials planning to spend $10-$30 per meal fell 2%, while the proportion that plan to spend $10 or less per meal increased by the same margin.

Among those planning to reallocate restaurant spending to other areas, 35% chose “retirement” (up 2% from last year), while 38% chose “travel” (down 3%).

“The restaurant consumer today is jittery, and for good reason,” Adam Werner, managing director and global co-head of AlixPartners’ restaurant, hospitality and leisure practice, said. “The economy – which, of course, drives so much of restaurant spending to begin with – looks great in the rear-view mirror, but what lies ahead is uncertain, and our survey results reflect that consumers are very aware of that.”

The survey also revealed that 59% of consumers favor raising the minimum wage to $15 per hour – more than double the current federal minimum wage. The popular support for a massive minimum wage increase is a troubling statistic for the chain restaurant industry, which relies heavily on minimum wage labor and operates on razor thin margins. A further 68% of millennials support a $15 minimum, so the issue is unlikely to go away in the future.

Rising labor costs have already incented a number of companies to pilot technological advances to reduce need for labor. McDonald’s, for example, has rolled out touchscreen kiosks at most of its restaurants, reducing the number of cashiers needed. As advances in automation continue, capital-rich firms will be able to reduce their reliance on human labor further – and the dominant dialogue will perhaps shift from minimum wage to basic income.

“Whether it’s the minimum wage, staffing and hours, or even automatic gratuities, labor issues in this industry are only going to get thornier and more complex,” said Kurt Schnaubelt, a managing director in AlixPartners’ restaurant, hospitality and leisure practice and report co-author. “Operators need to use strategic pricing to put value right on the menu to begin with, and they need to have a toolbox of strategies to deal with all the labor issues coming their way. Given the pennies-on-the-dollar margins in the industry today, there is no alternative.”