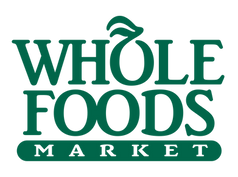 Amazon has announced that it will acquire Whole Foods Market Inc. for a whopping $13.7 billion, launching the online retailer into the supermarket business with a total of 431 Whole Foods locations worldwide. Damn, that was fast.

This is a powerful move for the ecommerce superpower. Amazon is already one of the largest companies in the world and just became a major player in the food industry. You know, that stuff we all need to survive? While trying to wrap our heads around the sheer magnitude of the situation, thoughts about corporations getting too big to fail and machines rising to power come to mind. But what are the real implications of Amazon’s power move? 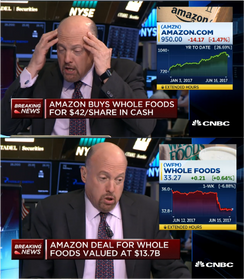 CNBC’s Cramer was having a hell of time digesting news of the acquisition this morning. In the few moments he was able to collect himself enough to speak coherently, he explained how profound of an impact this business move could have on the future of food retail.

“This is a reordering. Amazon can do for food what they did for every part of retail… This affects everybody who sells food because you can’t compete. They will not let you compete.”

Just how powerful is Amazon? Amazon CEO Jeff Bezos is now the second richest man in the world behind Bill Gates, and he is closing the gap fast. Bezos’ net worth increased by TWENTY BILLION DOLLARS this year alone to make his net worth $85.4 billion. Clearly this guy has some money to throw around, and he’s putting it to use by entering the food industry.

We don’t think this is the last stop for Amazon, however. Their future in the food industry could easily involve taking over major restaurant chains. Just like they did with Whole Foods, Amazon could purchase a struggling yet prominent restaurant chain and use their immense wealth and capital to completely blow the doors off the competition with their ability to deliver. Imagine going onto Amazon.com, ordering a pizza and having it delivered by a pizza-making drone. The future could hold more opportunities to stay on the couch. We’re not rejecting the idea of flying pizzas.

Restaurants be warned; If Amazon does choose to move into the restaurant business, chaos is sure to ensue. As it currently stands, restaurants are already struggling to keep their doors open. If a corporate superpower like Amazon enters the stage, more closures will be imminent.

From the TAGeXperts, keep your eye out for more power moves from Amazon. We don’t expect their quest for world domination to end here.