Closed: The internet is mourning this Fresno restaurant that employed drug rehab grads 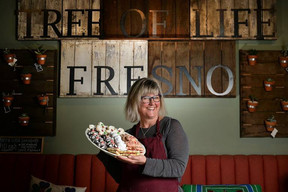 The restaurant, which first opened in downtown Fresno in 2016 before moving north near Blackstone and Herndon avenues, shared news of the closure on its Twitter and Facebook pages.

It did not say why it closed, stating in each post: “It is with great sadness, that we announce Tree of Life Cafe is permanently closed. Thank you all for supporting us throughout the years.”

Customers responded immediately on Facebook with sadness and well wishes.

Tree of Life first opened near the corner of Kern and L streets, in what is now GG’s Food Factory.

It was a farm-to-fork restaurant that employed men and women who have gone through drug- and alcohol-rehabilitation programs. That mission was a key part of Tree of Life’s business, though it also gained a reputation for its baked goods, especially pies. It offered a variety of home cooking-style dishes, along with flights of soup and many gluten-free and vegan options, too.

Owner Carolyn Ocheltree is a staunch supporter of downtown, organizing events to bring people downtown and actively working with the city of Fresno, the Fresno Grizzlies, the Fresno Chamber of Commerce and others on downtown issues.

But in October 2018, Ocheltree announced in a release that Tree of Life was moving north, near Blackstone and Herndon avenues next to the Imperial Garden Chinese restaurant. The statement said customers wanted free parking (not meters) and safe, well-lit, people-filled streets at night.

“There’s so many people who say, ‘Oh I love what you do, we love your foods, we love your mission, but we just never get downtown,’” she said at the time.