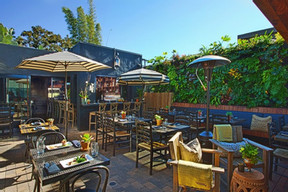 Nearly a dozen dining establishments operated by San Diego restaurateur Gina Champion-Cain are closing or have already shuttered — less than a month after the Securities and Exchange Commission accused her and her investment company of operating a $300 million scheme that the agency says defrauded roughly 50 investors.

Four of the restaurants in Champion-Cain’s portfolio of businesses, however, will remain open — among them, Patio on Lamont and Saska’s — and will be operated, at least in the short term, by San Diego’s Cohn Restaurant Group. In addition to the Patio in Pacific Beach and Saska’s in Mission Beach, the Cohn group also will be taking over operation of the Surf Rider restaurants in La Mesa and Ocean Beach, effective Monday, a spokesman for Champion-Cain announced Tuesday.

By the end of the month, though, much of the familiar Patio-branded restaurant enterprise will be no more.

Freitag was appointed following the filing of the SEC’s complaint late last month in which it alleged that ANI Development had fraudulently raised hundreds of millions of dollars since 2012 by claiming to investors that they could profit by issuing short-term, high-interest loans to people applying for alcohol licenses in California. Instead of using the investors’ money to make those loans, Champion-Cain instead directed “significant amounts of investor funds” to a company that she controlled, according to the complaint.

Complicating Freitag’s efforts to come up with a plan for continuing to operate some ANI properties while disposing of others is an “acute short-term cash shortage,” the receiver wrote in a legal brief she filed Sept. 13. She asserts that the Chicago Title Company, in defiance of a court order, is refusing to turn over millions of dollars currently held in an account maintained by the title company.

“While I have already commenced reduction of expenses of the receivership estate and while I anticipated that I will be able to add resources to the receivership estate in the relatively near term through the sale of real property and other recovery efforts, those efforts will take time,” Freitag stated in her court filing … Indeed, if additional cash is not made available immediately (i.e., the next several days), I will be forced to make decisions concerning the business operations and personnel that will be based solely on the need to immediately reduce expenses rather than a reasoned analysis of whether assets and businesses are likely to yield a net benefit to the receivership estate.”

Since that filing, a number of restaurants have either closed — Himmelberg’s in East Village and Surf Rider in Crown Point — or are about to close.

Attorneys for Chicago Title and nearly 30 people who lent Champion-Cain and ANI $20 million to $30 million have filed documents protesting turning over the $11 million in the disputed account. Chicago Title asserts that the funds in the account were procured by fraud and never became ANI property, while investors, in a separate legal filing, argue that Freitag has made it clear that she is effectively “proposing to do, with the Court’s imprimatur, precisely what the defendants did illegally — take the lender-victims’ money (in which they hold a security interest) and use it to fund the Defendants’ other businesses and real estate ventures.”

While Freitag never states in court papers how she chose which Champion-Cain restaurants to continue operating, Cohn Restaurant Group founder David Cohn said he suspects the ones his company will be managing were viewed as the strongest.

“In the end, the receiver has to liquidate the assets, so in the interim they needed someone to come in and operate these restaurants and asked us if we were willing to do it, and they selected these four,” Cohn said. “We think these are great brands, and some, like Saska’s, are a San Diego institution and we would hate to see them close. I can just assume you would keep the strongest open.”

In her filing with the court, Freitag noted that some of Champion-Cain’s real estate assets are “encumbered by debts” or are not generating revenue.

Attorneys for Champion-Cain and ANI filed court papers last week supporting Freitag’s request to take control of the Chicago Title account in dispute. They argued that the “irreversible actions that the Receiver will be forced to take will directly reduce the recovery available to the alleged victims in this case and may negatively impact Defendant’s potential civil liability in this case.” ANI and Champion-Cain have been cooperating with the SEC in the civil litigation.

Meanwhile, Cohn, whose company is currently looking at staffing that will be needed to run the remaining restaurants properly, said he expects his involvement will be short-term, possibly three to six months.