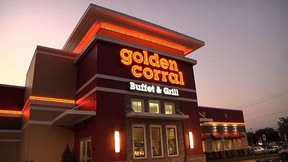 For the first time since 2005, there is a Golden Corral in Central New York.

A line of hungry diners filled the winding queue and even spilled outside as they waited to enter the restaurant, which after nearly three years of talks, opened for business today.

This was not franchise owner Niral Patel’s first grand opening—he also owns Golden Corrals in Albany, Saratoga, Queensbury, Poughkeepsie and two in New Jersey—but he said this might be his biggest.

“I hope I don’t upset some other people, but this has been the most exciting opening of my life, for sure,” Patel said.

Patel, who has been a Golden Corral franchisee for nearly 20 years, said he has received more requests for a Syracuse location than any other Upstate New York locale in recent years.

“We’ve had an overwhelming response from the community, which has been simply awesome.”

The new restaurant employs 165 people and is one of only two Golden Corrals in the country—the other is in Greensboro, North Carolina—with the national chain’s new design, which Patel said was designed to be a more comfortable, open setting, with a stone fireplace serving as the dining room’s centerpiece.

The line out the door, which formed as soon as the restaurant opened at 10 a.m. and continued through the lunchtime hours, moved quickly, yet appeared to stand still, as new diners arrived to take a spot in line. The chain said that the first customer had camped out in the parking lot since 11:30 p.m. Sunday to ensure his top spot in line.

Patel stood near the exit, shaking hands and thanking satiated diners. One diner came back inside the restaurant to ask for his help tracking down her waitress who went on break before she was able to give her a tip. Another diner, who told Patel that she used to drive to Rochester to dine at Golden Corral, thanked him for opening the restaurant.

“Can you believe it? They’re thanking me!” Patel said. “I can’t believe it. It really truly is overwhelming.”

The restaurant, located at 115 Simon Drive, is open for breakfast starting at 7:30 a.m. from Friday to Sunday and for brunch/lunch on weekdays at 10 a.m. Dinner, which starts at 11 a.m. on Sunday and 4 p.m. all other days, runs until 10 p.m. daily. Prices for adults range from $9.99 for breakfast to $16.49 for dinner. Prices are discounted for seniors, teens and children.