Oversaturation in the Restaurant Industry

Pro tip to anybody reading this thinking about starting a new restaurant chain: don’t.

Find another business. Buy the franchise rights to a group of legacy chains that have proven themselves over many years (but don’t borrow too much to do it). Invest in something else. But whatever you do, don’t consider another restaurant chain.

To be sure, such advice is folly, akin to putting up a lean-to in the face of a hurricane. People start restaurants all the time and are unlikely to change anytime soon as long as the business provides such low barriers to entry.

But let’s face it: The U.S. restaurant business is full. Industry saturation is the top cause of weak traffic. And until the business holds the line on supply growth for an extended period of time, this will not change.

This week, we asked Piper Jaffray analyst Nicole Miller Regan why industry traffic remains weak even though teens spend more on food than anything else. “Too many units,” she replied. 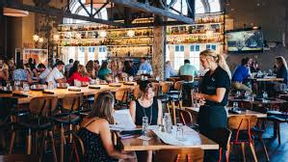 “There are a whole lot of places to choose from. If one restaurant’s going to close, another is going to open. But that doesn’t change how many times you eat out a week.”

The restaurant industry earned much of its growth for decades by consumers increasing the number of times per week that they dine out.

U.S. consumers had plenty of reason to. As the percentage of dual-income households grew and time demands on many Americans gave them less time to cook and clean, they ate out in droves.

The restaurant industry also did a great job of providing new menu items, new service styles, new business models and even new dayparts so they could cater to a broad range of consumers.

For instance, while there are theoretically three meals per day, restaurants have six: breakfast, morning snack, lunch, afternoon snack, dinner and late night. And beverage shops such as Starbucks and Jamba Juice proliferated.

While the industry took a break during the recession, it started right over again immediately afterward as investors pumped money into upstart fast-casual chains. Concepts such as Shake Shack and Blaze Pizza and MOD Pizza and Sweetgreen that we consider stalwarts now have only emerged since the recession.

But the simple fact is, all this growth has the U.S. at a saturation point.

As it is, U.S. consumers are spending nearly half of their food and beverage dollar at restaurants. While that theoretically means that there remains plenty of potential growth for restaurants, there’s a natural limit on how much people will really eat out.

People love eating out and they hate doing the dishes. But they only have so much room in their budgets. They may also want to control what they eat, and food at home is healthier than food consumed at a restaurant.

Plus, many people simply like cooking. We spend an awful lot of money on kitchen appliances and gadgets and newer, fancier grills and even flat-top griddles not to use them.

And lately, we’ve seen plenty of evidence of this saturation point:

Chains such as Ruby Tuesday and Dickey’s Barbecue Pit have closed locations, while others have filed for bankruptcy protection

Companies struggling to generate growth are resorting to acquisitions.

Fast-food chains are increasingly relying on discounts to get customers in the door. Only recently, Burger King started selling 10 chicken nuggets for $1. This week, Wendy’s announced a $1 any-size-fry deal, and many other chains are seeing what they can fit in a $5 box. Discounts are proliferating so much that Del Taco just had one of its most successful $1 product launches in its history and lost traffic anyway.

A shocking number of fast-casual chains have up and closed their doors, opting to give up rather than find a buyer, including the recently shuttered Taylor Gourmet. Such complete chain closures used to be rare events.

And restaurants have hired so many people that the industry is now in the midst of one of the worst labor shortages in its history.

Sure, there are major success stories like Domino’s Pizza and Chick-fil-A and Raising Cane’s and MOD Pizza and Blaze Pizza. But consumers are picking winners and punishing losers, which is what they do when they have a lot of choices. Industry traffic has been weak for three-plus years.

Readers of this space will be surprised by none of this. But it’s an important reminder as delivery bulls promise incremental sales and investors keep finding small, upstart chains to prop up.

The business is saturated. If you get growth, it can only come from an existing provider. You will have to work harder than ever to get customers in your door and any success could be fleeting—as some of those fast-casual chains that emerged a few years ago have discovered.