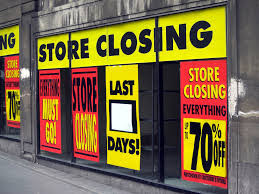 This hasn’t been a good month in the retail world. Fred’s, a 72-year-old discounting chain based in Memphis, announced that it would file for bankruptcy protection and close all of its stores. According to CNN, it had 557 locations earlier this year.

Meanwhile, the game retailing chain GameStop announced 200 closures of its own, and suggested that it would close a lot more in the coming years.

Retail closures have been increasingly common this year, and don’t appear to be getting better. Those closures and the restaurant industry landscape at the moment are inextricably linked, whether a chain has sales problems or not. The shift of so much shopping to the Internet has changed the rules of the game.

This year has been terrible for retailers. According to Coresight Research, U.S. retailers have announced 8,567 closures versus just 3,486 openings, or a net decline of about 5,000 locations.

By comparison, retailers closed 5,844 locations all of last year against 3,258 openings. In other words: The retail world has already doubled its net closures in the U.S. this year and there are still three months to go in 2019.

Coresight expects as many as 12,000 retail closures by the end of the year.

The struggling retail business has been an underrated factor in restaurant industry sales and traffic challenges in recent years. Same-store sales and traffic have been mostly down since 2016 despite a strong economy.

According to Black Box Intelligence, same-store traffic declined 3.9% in August and 4% in July. On a two-year basis in July, in fact, traffic was down 5.8%.

Weak retail traffic is a clear factor. The industry is rapidly losing a major occasion in the form of shopping.

Casual dining concepts in particular grew up around shopping centers and malls, banking at least in part on the idea that consumers would sit down for a meal after a long day of supporting the economy.

It’s not just the occasion that is lost, however, but the opportunity. The shift of retail traffic toward Amazon has contributed to the “cocooning” of the population, driving more sales to takeout and delivery.

Many chains, like Starbucks, McDonald’s, Burger King and others, can take advantage of this and have been spending big to keep that advantage.

But those concepts that have grown up around retail shopping centers cannot, because they simply don’t have the access to those kinds of customers. Do not underestimate the impact of real estate development strategies on a chain’s sales prospects.

“The enclosed mall locations are in real trouble,” Denny Marie Post, the former CEO of Red Robin, told me recently on the A Deeper Dive podcast. “They do not in any way benefit from to-go. Are you really going to park, traipse across a parking lot to a mall to pick up to-go food? Those locations don’t have any ability to drive access.”

Restaurants can already adapt to this new reality, and many already are. Companies that lure customers based on the experiences they offer, such as Punch Bowl Social, are in higher demand.

The ghost kitchen provider Kitchen United, meanwhile, is also getting more attention and investment because of the way it fosters takeout and delivery. Restaurant chains with a heavy dine-in component simply aren’t as attractive as they once were.